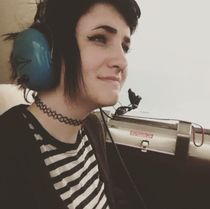 MAZAMA — Search and rescue crews continued to search Tuesday afternoon for an airplane bound for Lynden that crashed Saturday with three people on board.

On Monday, 16-year-old Autumn Veatch walked on to Highway 20 near Mazama from the Easy Pass Trail area. She was a passenger on the airplane, traveling with her two step-grandparents, Leland and Sharon Bowman, of Marion, Montana.

Veatch remained at Three Rivers Hospital in Brewster in stable condition on Tuesday. Outside, two dozen reporters, some from across the country, waited for her to be released, hoping to hear her story.

Initial reports indicated that Veatch stayed with the plane for a day after it crashed, but Okanogan County Sheriff Frank Rogers said she left the plane “pretty much immediately.” She walked for two days and tried to sleep at night, but was just too cold, Rogers said.

Veatch didn’t eat or drink anything during that time. She followed creeks in the mountains until she found a footbridge, which took her to a trailhead, and eventually to Highway 20, about 20 miles north of the Mazama Store, Rogers said.

“She’s just a tough young lady,” Rogers said. “She kept focused and kept doing what she had to do.”

At Highway 20, two unidentified men stopped and drove her to the Mazama Store, where 911 was called.

On Tuesday in Brewster, her father, David Veatch came out twice from the hospital, once in the morning to get some McDonald’s McNuggets for his daughter’s breakfast, and in the afternoon to head to his motel for a shower. He said little to the waiting reporters, except that doctors were seeing his daughter. When asked if they would go home on Tuesday, he said it depended on the doctors.

The trail is in some of the roughest terrain in the state, LaBoe said.

A helicopter from the U.S. Navy searched until about 11 p.m. Monday using night vision goggles but didn’t find the crash sight, LaBoe said.

Fixed-wing airplanes from the Civil Air Patrol have been called off the search, said Jessica Jerwa, a spokeswoman for the CAP. The aircraft are no longer necessary because of the information Veatch provided authorities on the location of the crashed plane.

Helicopters are able to use the “hover and hold” method while searching, Jerwa said. It’s easier for a helicopter to do this than an airplane.

“You could fly over wreckage in a flat meadow and still not see it,” Jerwa said. Searchers are looking in a vertical space — on the side of mountains.

Jerwa said this area of the Cascade Mountains is considered “the Alps of Washington because they’re so rugged … so that complicates things.”

K.C. Mehaffey contributed to this report.

MAZAMA – Aerial search crews found plane wreckage in the north Cascade Mountains Tuesday evening. The Washington State Department of Transportation, however, has not confirmed that it’s the wreckage of a plane that crashed Saturday on a flight from Kalispell, Montana.

DOT spokeswoman Barbara LaBoe reported just after 10:30 p.m. Tuesday that the wreckage was spotted. So far, the wreckage has only been seen from the air.

Ground crews will be coordinated through the Skagit County Sheriff’s Office, LaBoe said in a news release.

BREWSTER — On Monday, 16-year-old Autumn Veatch was finding her way out of the forest. On Wednesday, she was back home.

Veatch walked on to Highway 20 from the Easy Pass Trail Monday afternoon. Her step-grandparents, the only other passengers on the plane, Leland and Sharon Bowman of Marion, Montana, are still unaccounted for.

A second plane has been missing since Saturday afternoon, according to the DOT, and search crews were working to reach plane wreckage found around 11:30 a.m. Wednesday in Whatcom County, which borders Okanogan County.

Two passengers were on board that plane from International Falls, Minnesota, to Orcas Island. The plane was traveling over the Cascade Mountains around the same time as the flight from Kalispell.

The flight from Kalispell dropped off the radar just after 3:20 p.m. Saturday. The Minnesota flight lost radar connection “several hours” before the Montana plane was last picked up on the radar, the DOT said in a news release. “There is no evidence the two missing planes were involved in any mid-air collision,” the DOT reported.

Thunderstorms hit the North Cascades northwest of Mazama on Saturday from noon to 6 p.m., when both planes were expected to be passing through, said Bob Tobin, meteorologist at the National Weather Service’s Spokane office. Winds were gusting up to 25 mph.

Tobin said there were up to 100 lightning strikes during the six-hour period from Lake Chelan to the Canadian border, mainly along the Cascade crest.

The DOT has been in contact with the Federal Aviation Administration and the National Transportation Safety Board over the past few days. LaBoe said those crews might begin investigating once the crashed aircraft are reached.