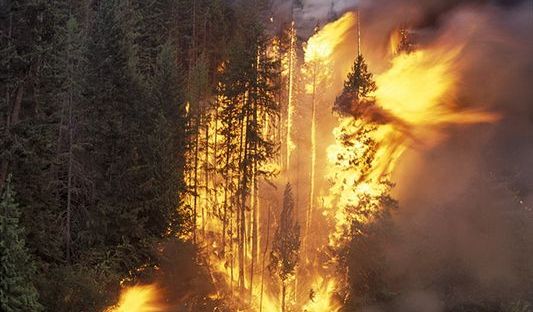 WENATCHEE — Chris Rader has worked in some capacity with the Wenatchee Valley Museum & Cultural Center for the last 10 years. In that time, there’s only been one exhibit with a crew larger than the one planning a new wildfire exhibit that’s 20 years in the making.

Nearly 30 people have been working in some way, regularly, to make the exhibit come to life, Rader said.

Set to open to the public Sept. 4, the Wildfires and Us exhibit will boast 141 pictures, most of them taken by local photographer John Marshall. There will also be 13 text panels, and 10 themes of wildfire education, in nearly 2,700 square feet of space.

“The exhibit is going to raise awareness of some of the problems and get people thinking about maybe governmental changes that would make it easier to restore forest health,” said Rader, the museum’s communications and programs coordinator.

The exhibit will also feature trees with burn scars, firefighting equipment lent by the Forest Service, and clothing required to fight fires.

Some reference will be made to the Sleepy Hollow Fire, Rader said, but it won’t be the main thrust of the exhibit.

Marshall’s photos date as far back as 1994 when large firestorms, including the Tyee Creek Fire, broke out near Leavenworth and Entiat, Rader said.

“In 1994, I had no idea they’d be at Wenatchee Valley Museum,” Marshall said. Now he is excited for the public to be educated on the area’s environment. “People need to understand that we live in an environment that historically burns quite often.”

Originally, the plan was to have before and after photos of the 1994 fires in the exhibit. Marshall took photos from the same locations on a regular basis as wildland regrew. After the Carlton Complex Fire last year, the planning group decided to expand the scope of the exhibit to tell the whole story of wildfire in the eastern Cascades.

“It’s part of the ecosystem,” Rader said. “Wildfire around here is inevitable … so we’re not going to change it.”

The museum hopes to educate the public on types of fires, natural forest conditions, plants and animals that have adapted to fire, and the benefits of prescribed burning.

Stopping wildfires has not been good for the forests, Rader said. That has allowed forests to become too dense, creating more fuel for wildfires to get out of hand.

Museum staff also plan to partner with Wenatchee and Eastmont School districts to get students into the exhibit and out to Squilchuck State Park for hands-on learning about the forest and wildfires, Rader said.

An advisory committee helped raise money for the exhibit and educational programming, Rader said. The committee plans to hold a wildfire seminar in town later this year. Gov. Jay Inslee met with the group earlier in June.

The exhibit is expected to cost up to $75,000 for staff time, materials, educational programming for students, and a contract with Marshall.

“It’s been a challenge,” Marshall said. “When I’m out taking pictures, all the decisions are on my own, but this is something that’s a cooperative project with the museum and it involved other people’s opinions, so that makes it different.”

Once open, Wildfires and Us is scheduled to run through Nov. 21. The current exhibit, Extraordinary Ordinary People, will close Aug. 8 for the team to set up Wildfires and Us.

The exhibit team began planning for Wildfires and Us in January, and is moving “full-steam ahead” for the fast-approaching grand open.

“It’s a complex subject. There’s so much that we could say,” Rader said. “It’s been challenging to narrow down our message.”